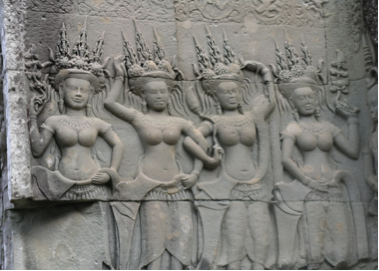 When the Khmer Rouge overthrew the government of Cambodia on 17 April 1975, they forced everyone from the cities into labor camps in the countryside. More than one million Cambodians died from torture, starvation, illness, or execution during the nearly four years they controlled the country. When the Vietnamese army invaded Cambodia in 1979 and forced the Khmer Rouge from power, the survivors spread across the country, many crossing the border into Thailand to refugee camps. Most families had been split apart and did not know where relatives were or if they were still alive. Some families were able to reunite in the camps, though others weren’t able to make contact until years later. Jen was a child during this time.

I was raised by my aunt and her husband in Phnom Penh. The whole household was a lot of young adults, they came to the city to study and look for job. I went to French private pre-school, and then I start Cambodian class at elementary. Then Khmer Rouge start.

During the Khmer Rouge time, I was in a province called Kampot. During the fighting between the Khmer Rouge and the Vietnamese, we went to another area, very rural. My family only five of us: my mom [who raised me], and my father’s younger sister, and the other older auntie and her son, and me. Finally the Khmer Rouge gave up. We decided to come down the mountain and follow the route to the village until we get out.

We just have two pair of clothes, no shoes, walking from one province to the next barefoot. Very hard. We almost died on that mountain, pretty much eating leaf. [We had] no water, no more rice, and on the mountain nothing out there.

We go from the mountain to the border of Cambodia and Thailand, in the jungle. We go to a province called Kampong Thom because to go back to Phnom Penh not safe, and we can go to Thailand that way. Then my mom [who raised me] found my younger aunt that raised my other four siblings. They were separated from my father and my little brother. My four sisters told me my biological mother die before the [Vietnamese] invasion, and then my biological father and my little brother die during the [invasion]. My mother that raised me, she lost her husband in the war.

In the refugee camp there were already extended family. Almost fifty of us, from little baby to sixty years old. And then we split between three countries. My mother who raised me decide to wait for United States because her husband’s younger brother sponsor [us]. My sister and my [other] aunt decide to unite with my brother and sister in France, and my other second cousin decided to go to Australia.

In 1983, July, [I came] to Salem Oregon. Two days [after we came], we end up in blueberry field. You can imagine: mid-July, humid, summer rain, and hot. My next door neighbor was Mexican, they just speak Spanish to me and I could not understand. Next day we’re walking to blueberry field like 5 am in the morning. Salem have big blueberry farm everywhere. At the field, we met a lot of Cambodian families. Coming back, we were so tired, so hot, don’t know where to go, don’t know how to get on the bus. So the Cambodian people who drive those big American station wagon, they give us a ride.

Who would know I’d end up in blueberry field in America? When I was in refugee camp sitting and looking at all those post cards, who would imagine I’d be picking berries? That was my introduction to American life. I was 14, 15, maybe 16.

Every summer we went [to the fields] until I left Salem. When I have summer job, I would [work in the fields] on the weekend. I went to high school [in Salem] for four years. Then came to Seattle, to Seattle Central Community College, got married, and worked at Refugee Women’s Alliance [ReWA]. Twenty-five years ago, ReWA just Southeast Asian refugees. Now you have women from east African, east European, all over the world.

[After ReWA], I took a job at Harborview [Medical Center] as caseworker/cultural mediator. The program was originally called Refugee Clinic serving Southeast Asian refugee. And then it change into International Medicine Clinic. The program has been [going] twenty-four years now.

My job keeps evolving according to issue in the community. At the beginning, I was sent to home visit, Community House Calls. The purpose of the program is to cut down health care costs, not to show up at the emergency room. We work with single mothers to encourage them breastfeeding, maternity care. But then we discover other issue, like gang, social issue, and all the transition of adolescence problem. Deportation [of young Cambodians] started in the 1990’s. Now we getting chronic disease, elderly, aging, homeless. [The elderly are] lonely, depressed, isolated [and] people developing long time diabetes, kidney failure, stroke, cancer, heart problem, all kinds of major illness. One of my patients just got kidney transplant last month, and other one now is inpatient for second opinion after rejected for liver transplant. We have diabetes navigator. We do end of life palliative care. We have caseworker/cultural mediator doing all this: three Spanish, two Somali, we have Vietnamese, Cambodian, and Ethiopian. Seven or eight of us now. We do a lot of educational outreach, collaborating with each community for health literacy.

At the beginning, the refugee clinic was serving older patients, but they didn’t understand why Cambodian have all these symptomatic physical pain. Which is PTSD. But nobody ever know. They do blood test, they do every test, they never found anything. At that time, Cambodian already been there almost 10 years.

Cambodians are very resilient, quiet, trying to survive, and people don’t talk much. But [many people] don’t like counseling. They not crazy, but their mind is not healthy. My friend say, ‘How do you do your job, how do you live with that?’ I don’t know. Sometimes I feel like the job is helping me, and I feel rewarded, [like] when a patient got kidney transplant and they doing well. That give me hope.

I’m up and down with PTSD. A month ago, my PTSD come so hard. I had my Cambodian patient who was dying. It hit me very hard. And then I have a young 35 year-old Cambodian who have a motorcycle accident, and meeting to inform the parents that probably he won’t make it. Everyone in the family were positive that he would make it. They told the [medical] team that their father came to the United States, don’t speak language, and bring all the kids here safely, walk across the border to Thailand, step on [land] mine, and he come safe, so they don’t want to give up. The team start crying, and then I start [to be] emotional. And I just told the team, too much. I don’t want to be here any more.

Right now I feel a little better after twenty-four years. I just started forming a Cambodian health board, a role model from Somali Health Board. When I start this last year, I was so excited. We had Cambodian boy who is second year medical student, and then another young girl is third year in public health, and she’s going to go to medical school too after she finish. I’m so happy to see them. That’s my role in the health board now, I want to see more of my young generation in the health care field. [In] twenty-four years, I rarely see any Cambodian: all the pharmacist are Vietnamese, all the doctors are Vietnamese, and now I see Somali, and where’s my Cambodian people? Even in very small number, it’s made me more positive.

When you first come as a refugee, you struggle: new life, learning new language, new culture, new friend, new home. We all survive, but just to understand that refugees who come before, who come now, all have the same story, same path. The doctor I work with said that after seeing Cambodian suffer PTSD for 30 years, finally he’s seeing some smiling in us. He says it takes time, and to remind all the new arrival refugees to understand that this is everyone’s story.